The 2018 centenary of the suffrage movement was marked in Camden with a display exhibition at the Camden Local Studies and Archives Centre. A little-known footnote is the contribution of Alice Maud Barker and Albert Oscar Mohr, who had their photographic studio, the Merchants Portrait Company, in 106-110 Kentish Town Road (the Dunn’s clothing warehouse).

The picture, which has been used with a recent planning application, shows the Merchant’s Portrait Co. sign on the second floor: 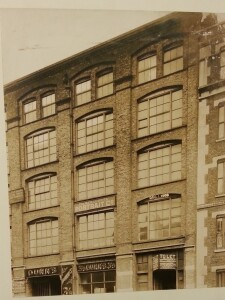 Photography archives record Mohr as an enlarger, living in Holloway, and he may have done the printing. Little is known of Barker – although an Ethel Barker was a family portraitist in Putney, and an Ethel Alice Maud Barker had a divorce in 1919.

A portrait taken by the Merchants’ Portrait Company in 1909 was of Charlotte Despard, first president of the Women’s Social and Political Union, who “wore sandals all year round and always had a Spanish mantilla on her head”. 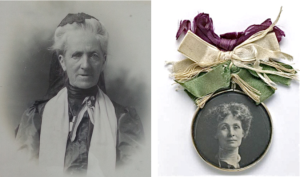 The Barker & Mohr photos of Charlotte Despard are in The National Archives. The Merchants’ Portrait Company lives on in the contemporary world through another medium: lapel-badges from the period bearing the company’s name and address printed on the pin are nowadays collected as memorabilia.  Styling themselves “Makers of the Womens’ Social and Political Union badge”, the company marketed a picture of the WSPU founder Mrs Emmeline Pankhurst for sale with feminist-coloured ribbons for 5d.

The badge for the Women’s Freedom League, now in the Museum of London, encourages women to boycott the April 1911 Census through spoiled or incomplete census returns. 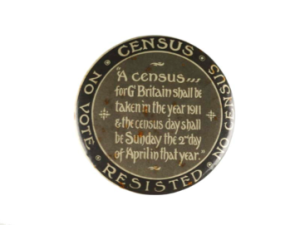 And materials with Suffragist colours include medals and lapel badges:

While the badges are now traded on the internet (including in the USA), there’s a small historical story closer to home.  Alice Kedge, a 14-year-old servant from Camden Town, “went to several [WSPU] meetings and bought myself a ‘Votes for Women’ badge… when my mother saw the badge, she said, “What are you doing with this thing? Take it off this minute …!”

Camden Town’s further relationship with suffragism is shown in the Suffrage Resources Database, which lists signatories for the 1866 petition to Parliament and 1914 amnesty for arrested women.

Helen Taylor, step-daughter of Liberal MP John Stuart Mill, organised a petition for women’s votes in 1866. Her sister Clementia Taylor, hostess for Kensington, contributed her considerable energies and a third sister, Caroline, was married to Henry Browne, of 40 Camden Square. So there were more signatures from Camden than from Hampstead: these included Frances Buss in Camden Street (already a Kensington associate), Mrs Frederick Goodall of 4 Camden Square, wife of the society painter and Elizabeth Crawford of 21 Rochester Square who was vice-president of the National Organisation of Girls’ Clubs.

There were fewer amnestied women from Camden, but included Dorothy Evans, who had been at North London Collegiate School (her father a builder), was a gymnastics teacher and after two prison sentences went on to become Secretary of the Women’s League for Peace and Freedom; and Caroline Charlotte Townshend, born in St Pancras, who had been at the Slade and then worked with Joan Howson in stained glass restoration.

There is a record also, in the 1913 Suffrage Annual and Women’s Who’s Who, of a march on its last day from Camden Town to Trafalgar Square.