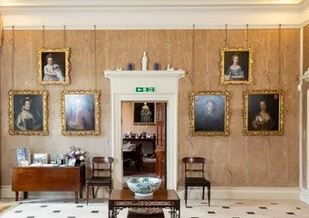 I had a kind invitation this month to visit Pencarrow House, near Bodmin, Cornwall and talk with the volunteer archivists there, Friends of Pencarrow, and Lady Molesworth who herself contributed to the discussion.

The research at Pencarrow has some limitations. A bomb hit the Plymouth records office during the war, destroying the legal records; and after a flood at Pencarrow House, the remaining records were deposited at the county archive in Truro in more than sixty boxes, and are yet to be catalogued. And both Truro and Plymouth archives are rebuilding and currently have limited access. So there are no records at present available for when Frances might have been at Pencarrow.

But there are the paintings by Reynolds of Frances’ parents, William and Elizabeth – indeed both Molesworth brothers and one Smyth sister (as she was at the time of the sitting), who is labelled ‘Mrs Molesworth’. Here there was a little controversy, because the Pencarrow tradition, and Reynolds catalogue, calls her ‘Anne’, while I have found that her gravestone in Wembury and her father’s will at St Audries calls her ‘Elizabeth’.

I was interested to know  – Where is Reynolds’ fourth picture, the second sister, Frances Smyth? Indeed, as only one of the two sisters remains, why is it William’s wife, rather than John’s – in John’s house? It’s evident from Reynolds’ diary that he painted both sisters in 1755 – he has several sessions labelled ‘The Smyths’ in January to March as well several for ‘Mr Molesworth’. Both Frances and Elizabeth died after childbirth, in 1757 and 1758. And Wembury closed down, with all the household goods sold, in 1762 after William Molesworth died. So all four paintings, paid for by their father, Sir John Molesworth 4th Bt, would probably have been at Pencarrow.

But Pencarrow was being rebuilt at this time. Strangely, Sir John 4th Bt’s will (1766) states that he is ‘formerly of Pencarrow, now of Ethy’ – a village in the south of Cornwall. And the will is very short, with no statement of his estate, which presumably passed to his single son, Sir John 5th Bt. Did the pictures go to Ethy or stay during the rebuilding?

Equally pertinent, John 5th Bt, remarried in 1762, the year of his brother’ death, and a new dynamic would have come to Pencarrow with the arrival of Barbara St Aubyn. Together they had five children, of which two lived to be adults. Did the picture of the first wife disappear after the arrival of the second? There is a portrait of ‘Lady St Aubyn’ at Pencarrow by Reynolds, of 1758, which is Catherine, wife of Sir John St Aubyn — but no portrait of Barbara.

I brought to Pencarrow a copy of a catalogue entry of miniature picture exhibited at the South Kensington Museum (now the V&A) in 1865 by ‘Mrs Ford’ – who was the sister of Sir William Molesworth 8th Bt.  Pencarrow has still has these miniatures, in an old frame and setting, which I was able to see at close view. They exactly match the printed listing. They show ‘Frances Smith’, and they include Sir John Molesworth 4th Bt and Catherine Morrice his wife – that is, Frances Molesworth’s paternal grandparents.

That provides a further link in the Camden story, which is welcome.  Yet Reynolds’ Elizabeth Smyth portrait itself is different from the two men – the posture is awkward and the face ashen.  And the Frances Smyth miniature is different again – it is only three-quarter length, and the dress material very modest compared with the exuberance of Elizabeth’s (Reynolds delegated costume painting at the time to his assistant Peter Toms). We do not know if the miniature is taken from the original not.