Rochester Gardens is to the north of the Kings Road. The central gardens are triangular and the roads on three sides – Rochester Road curving, Rochester Terrace and Wilmot Place forming a right angle – have short extensions to the larger surrounding roads.

As Gillian Tindall’s book of 1976, The Fields Beneath, indicates in the title, these were once farmland. In James King’s Panorama, representing the land at around 1800, stretched northwards from Kings Road – now St Pancras Way.

Thompson’s map shows the field structure. In the northern corner is the Paddock, with sub-divisions shown in an 1810 map. 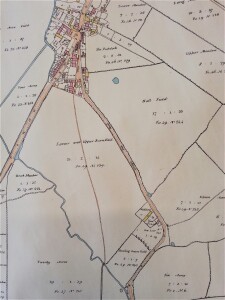 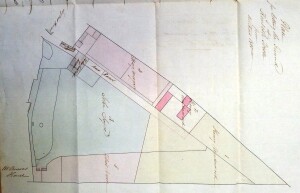 Joseph Kay, Lord Camden’s agent, had a plan for the Camden Town estate. While the primary interest was house-building, the Regency urban ideal also sought to add green, as squares, crescents and nursery gardens.  He made a preliminary sketch in a letter to Lord Camden: 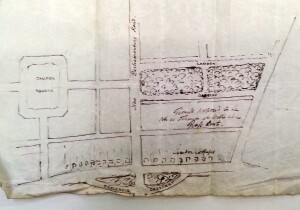 There would be two crescents either side of Camden Road as it crossed Kings Road looking northwards. To the east side, land was set out by Montgomery for a house on the main road and nursery behind – which became Rochester Square.  On the west side, next to Burford’s round panorama painting room and a terrace on Kings Roadand, an extension of Jeffreys Street northwards became Wilmot Place, leading into Rochester Road. 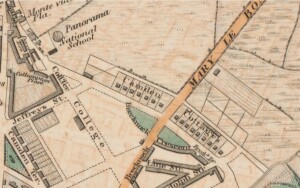 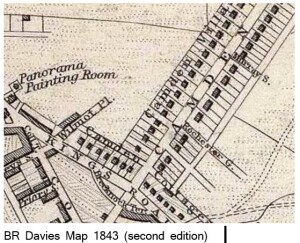 [Naming: The (third) Lord Camden, when young, was called Lord Brecknock, after the Jeffreys family Welsh estates. In 1835 he married Harriet Murray, first daughter of George, Bishop of Rochester (himself a grandson of the Scottish Duke of Atholl). The origin of Wilmot is unclear.]

The northern boundary land belonging to St Bartholomew’s Hospital did not start development until the 1850s and no linking roads were built. However, Rochester Road connected with Kentish Town Road when the Morgans, the local farming family, gave up a small strip near Kentish Town.

Plans for the development of Rochester Gardens are seen in the new leases (here seen from the north view). 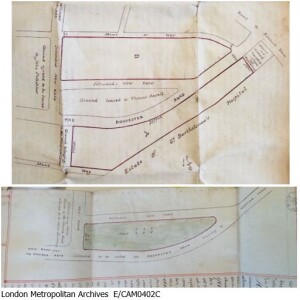 The first houses of Rochester Road were on the east side.  Many of the leases for land were taken by developer John Darlington, who himself lived in Rochester Terrace. Nevertheless, the variation – in heights, facades and decoration – indicates further sub-contracting to smaller builders.

There were also mews – Camden Cottages Mews was re-named Rochester Place, and Rochester Mews was built behind the villas of Camden Road.  At the northern point, the Bartholomew estate cut off Rochester Mews, and a turning was made, to become Whitcher Place (lease Misc91 was to John Whitcher for nursery land). 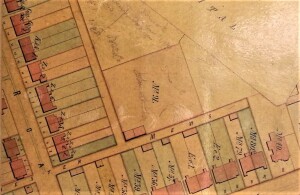