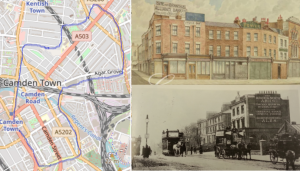 The Fleet and fossils

Cantlowes land lies across the shallow valley of the River Fleet.   Cantlowes manor stood on a spring line above the Fleet.

Fossils – of hippopotamus and elephant – from 100 000 years ago, found by Victorian workmen while digging sewers and collected by Nathaniel Wetherell, are now in the Natural History Museum.

In the 1990s, a mediaeval hearth was found in St Pancras Way, perhaps that of Cantlowes Manor.

Four manors of St Pancras. including Cantlowes, were recorded in Domesday Survey in 1086. 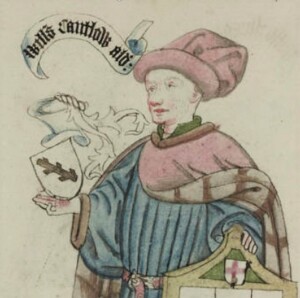 Sir William Cantlow  was Sheriff of London in 1465.  The Parliamentary Survey of 1649 describes Cantlowes land as 212 acres, the farm of Cantlowes manor.  St Paul’s Cathedral held the income, as landlords, and gave it as a ‘living’ to its clergy.

Ownership can be traced from the beginning of the seventeenth century until it was bought by  John Jeffreys, a City merchant, in 1682.

Cantlowes land passed, by inheritance and marriage, through four generations. John Jeffreys, who died in 1689, passed his business and wealth to two of his nephews, Sir Jeffrey Jeffreys and Sir John Jeffreys.

Sir Jeffrey’s younger son, Nicholas, married Frances, the daughter of another merchant family, the Eyles.  Nicholas inherited the Cantlowes land from his father as part of a settlement for his mother. He died in 1747 and his wife and four children inherited the family’s wealth.  Only the second daughter, Elizabeth, married – to the then unknown barrister Charles Pratt.

Five women (including mother Frances) were inheritors of the Jeffreys’ estate. But there is an unexpected finding of lunacy within the family.

William Camden, notable historian of Britannia built a house at Chislehurst, Kent. A hundred years later, Charles Pratt bought the house and then took the name for his title as Lord Camden.

Their only son, George Pratt, who was first titled Lord Brecknock, in 1835 married Harriet Murray . George became Earl Camden in 1840 and died in 1866.

While the Camdens were the landlords, the estate was under the management of their agents – from 1780 to 1803 by Augustine Greenland and Joseph Ward, solicitors; from 1804-1822 by the Mayfair agents Kent, Claridge and Iveson; from 1823 by Joseph Kay, architect, of Gower Street; and from 1847 by John Shaw, also an architect and estate manager.

1800s. The first houses were built along what is now Camden High Street and the Veterinary College was established by old St Pancras church.

1810s. Streets were extended eastwards and included Bayham  Street, home (for a short period) of Charles Dickens. The Regent’s Canal was dug from 1815 and opened in 1820 with four road bridges. There was a  cemetery for St Martins-in-the-Fields parish.

1820s.  Camden Road, from 1825, provided a new axis northwards. New building was along King’s Road, as Jeffreys Street near Kentish Town and Randolph Street at the former man 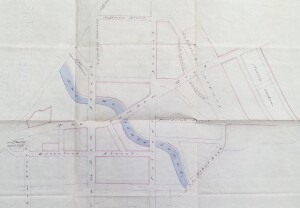 or house.  (Thomas Randolph, the prebendary of Cantlowes, was joint landlord with Lord Camden.)

1830s. Streets were extended across the valley of the Fleet

1840s Building along Camden Road and starting on squares either side. The North London Railway was built across Camden Gardens 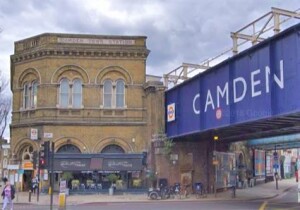 About seventy developers took contracts for land to build houses. They are identified through the estate register and maps.  The lives of builders can also be described – some lived in Camden Town in their own houses and had positions in local society.

The families and workers in Camden Town were a mix of artisan and middle classes. There are memories of recreation and entertainment in the fields – balloons, races, tea gardens.  By the Brecknock Arms there was Devonshire wrestling, Camden Town cricket pitch and occasional duels …

St Pancras politics was mostly led by ‘publicans and builders’ – for only a short while in the 1850s, a ‘Camden Hall’ group of middle class residents held sway.  Social records, including Booth’s survey of 1891,  shows Camden Town relatively advantaged compared with surrounding Somers Town and Kentish Town.

Schools have included private homes, a Ragged school, National Board Schools and Collegiate schools. The leadership of Frances Buss for girl’s education has gained national recognition.

For adult learning, Camden Town had day and evening institutes and for a short while, a Literary and Scientific Institute led by James de Carle Sowerby.  The Veterinary College in College Street and (from 1907) the Working Men’s College in Crowndale Road were also important local educational institutions.

The land was first cultivated as hay for feed and then dug as bricks for building.  The first commercial buildings were the Mother Red Caps inn and the Veterinary College. There were shops along main streets.

Men and women both had employment – in homes, small workshops and larger factories as well as for transport. Mews workshops were originally provided to service the houses, but in time became independent small businesses businesses, such as those servicing the motor trade or offering photography. As well as skilled trades, such as engraving and making musical instruments, there was employment at the canal wharves and the railways and in factories for printing. Some of the larger businesses – Idris, Maples, ABC –  were household names.

Camden Town’s artisan and professional classes valued proximity to central London’s commercial centre and its scholarly institutions. They included engravers and photographers and sculptors – but not the ‘Camden Town Group’ of modernist painters, who came no closer than Mornington Crescent.

Oliver Heaviside, mathematician, and Catherine Raisin, geologist, were both born in Camden town of artisanal parents.  James de Carle Sowerby, zoologist, was founder of the Camden Town Literary and Scientific Institute in Pratt Street. Eugenius Birch, who built thirteen seaside piers on British coasts, lived in Rochester Terrace. And George Swiney’s meterological station can still be seen at the top of a flagpole in his rear garden at Camden Square.

Camden Town, in writing of the 1860s, is a place of reference, perhaps to visit on an errand, or as a lodging or where ‘respectable’ people might live.  Lucy Clifford, who was born in Great College Street and married mathematician William Clifford, as a widow wrote novels including the 1870s best-seller ‘Mrs Keith’s Crime’.  George and Weedon Grossmith were at the boy’s Collegiate School in the High Street.  Writers staying shorter periods in Camden Town include Dickens, Rimbaud and Fontane. 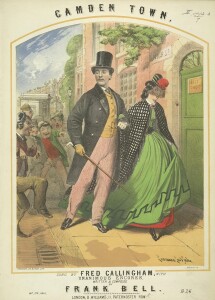 Music was made in churches and halls, and musicians have lived in Camden Town – in the twentieth century including conductors Eugene Goosens, Steuart Bedford and Charles Groves.

From the 1950s St Pancras, and then Camden Council, demolished some of the Georgian terraces but many remain, in Council, housing association and private ownership. The present political ward boundaries, however, and the conservation areas introduced in the 1970s, take too little account of the character of Camden Town as a Georgian suburb.